Where there is devastation, there are heroes.

There are thousands of heroic men and women in Ukraine who have spent the past month boldly defending their country—a large portion being the Church.

Many have lost their sense of normalcy in order to simply survive. And some have chosen to take on new roles to support the growing number of broken and hurting around them.

We want to introduce you to one of those heroes—who also happens to be our team member, Julie.

Hear her amazing testimony of how God has used her during this war.

Julie has been serving the orphaned and vulnerable with the Lifesong team for over 10 years.

In that time, she’s taught English classes in orphanages, led camps for children from orphanages, served crisis families, and hosted children at our after-school center. All the while, she’s developed deep relationships with many of the children she served, becoming a trusted friend and mentor.

While she’s spent the past 10 years in orphanages and on campsites, God abruptly changed the location of her mission field. Thankfully, her mission itself remains the same: the reach the most vulnerable in Ukraine.

At the end of February, Julie’s role suddenly shifted.

“On Feb 24th, I received the scary message that the war started. Everything changed. Life changed. Our lives and the lives of people we serve,” Julie shared. “The scariest moment for me happened the morning of the invasion. I heard huge explosions. Then I got a call from the orphanage. A girl I’m mentoring was crying. I didn’t know what was going on but the girl said, ‘Julie we are being bombed. The war started.'”

Julie’s family lives in Chernigov, where her father pastors a church.

“It was my decision to stay in the city as long as I could to find a way to be useful with my parents and church members who also decided to stay… I have my kids who are here in the orphanage and so that was a pretty easy decision to stay while those kids are here.”

During her 14 days in Chernigov, Julie quickly became one of our team’s main points of contact for evacuation.

Every day, she receives hundreds of calls from individuals looking for a way out of the city. She collected their information, especially from those with infants, small kids, and those who are disabled, to coordinate with drivers to evacuate them.

Julie also joined in delivering food around the city to those too weak or sick to leave their homes to go to bomb shelters. When the invasion first began, making deliveries during the day was relatively safe. But as the war continued, these deliveries became increasingly dangerous.

“On the third or fourth day of the war, the Russians started bombing the city during both the day and night, not just in the night. When you’re driving during the day, you see on both sides of you burning homes, things flying over your head, shrapnel hitting your car. Smell the burning gas stations and oil bases.”

But these deliveries are more than a physical lifeline.

“This simple act of kindness has never been such a strong tool to show people Jesus’ love. To proclaim peace and comfort while people are losing their homes and families demands trust in someone who is bigger than anyone. That’s only God.”

After 14 days in Chernigov, Julie made the decision to move to western Ukraine. Chernigov has no water, no gas, and most important for Julie, little to no phone connection. People are finding spots on top of buildings or walking hours to the city center to find a connection to make a call or send her a message. In western Ukraine, she can receive those calls and messages and coordinate with people still in Chernigov to get people out of the city.

Her church in Chernigov was destroyed early in the war, so local believers would gather in her family’s home. But since moving west, she’s been blessed to gather with believers in a church again.

“Last Sunday, it was my first time in church in Western Ukraine, and it was difficult for me to sing and pray through my emotions. With every word, now your attitude toward the lyrics and the script is now very different. Difficult to hold back tears.”

Julie has always had faith, but her view of God has grown and deepened dramatically in the last month.

“The book of Psalms has been opened in a brand new way. When I read the Psalms and I read the words of David who described all his feelings and worries during wartime, I just feel, ‘David, you know exactly what is going on in our country, in our hearts!’ This brings unbelievable comfort to my heart.”

May Julie’s deep faith inspire us in the U.S. and around the world to pursue God with even deeper determination! 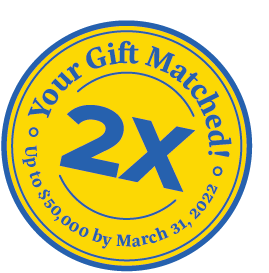 A generous supporter has agreed to MATCH all gifts toward Ukraine relief up to $50,000 when you give by March 31, 2022! 100% of your gift goes straight to Ukraine relief.