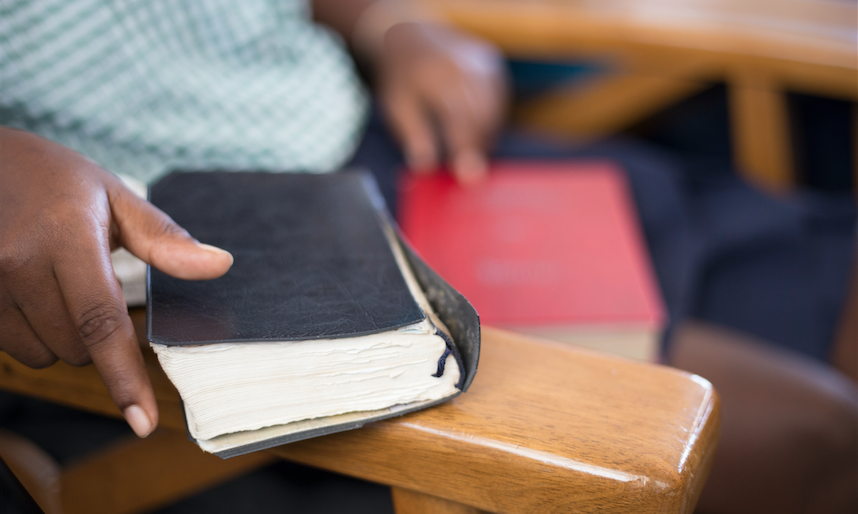 We completely renovated our house before moving in.

The process took about 5 months in total, was messy and costly, but in the end, worth it. The finished product is beautiful and comfortable and a place we love to call home.

But it wasn’t easy getting to this point. It was actually quite dirty—literally. For several weeks there were large piles of dirt sitting in the living room from some foundation work being done. During that phase, I felt like this house would never be clean enough to live in. But that’s the thing about renovations—things get a lot messier before they get more beautiful. You just have to be willing to see the process through to the end.

I’m going to go out on a limb here (and perhaps even poke a “sacred cow” a bit) but I believe there’s some renovating that needs to be done on how we understand, interpret and apply James 1:27. It’s our “favorite” verse in the foster care and adoption world, but it’s not necessarily saying what we think it is. It’s saying so much more.

Before we get to that, we’re going to have to walk through a bit of a laborious process that won’t necessarily feel fun, but I hope and trust in the end will produce a more beautiful understanding and accurate application of this passage than we had before.

Pure and undefiled religion before God the Father is this: to care for orphans and widows in their misfortune and to keep oneself unstained by the world. (James 1:27)

So, here we go. Let’s renovate a bit…

James begins by using words like “pure” and “undefiled”. Other translations might use the words “faultless”, “unblemished” or “spotless”. Whatever the words, James is describing something for us here. So, while commonly referred to as a “command” to care for orphans, James 1:27 is in fact NOT a command verse, it’s a descriptive verse.

There’s no command language in this verse. Instead, this verse is describing something that is pure and undefiled in its application and expression. Interesting fact—the Greek word for “pure” is translated as “catharsis” in English, meaning “cleansing”. This is the root from which our word “cathartic” is derived. This refers to an activity or practice which is psychologically or emotionally relieving or cleansing for us. It’s also the same root we get our word “catheter” from—a tube inserted into the body to drain toxic or potentially dangerous fluids. So there’s something pure and cleansing about what James is describing—not commanding.

We can begin paraphrasing James 1:27 with this statement: One of the purest and most undefiled…

When we think of the word religion we think of a variety of things—steeples, rituals or being scolded as a kid for taking too many crackers from the communion tray! But the word “religion” here, in its most distilled down form, refers to an outward expression of faith, or a demonstration of something that is inwardly true. It is describing a “pure and undefiled” outward expression or demonstration of something that is inwardly true—namely of who God is and what God does. 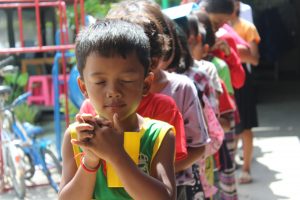 Martin Luther once said, “The world does not need a definition of religion as much as it needs a demonstration.” That’s pretty much the idea here, and the context of the whole book of James—a poignant call to put our faith in the gospel into action.

Perhaps he is suggesting that there is a particular outward expression of the gospel which is one of the “cleanest”, purest, and most vivid we could participate in. And not only is it pure in its demonstration but perhaps it’s also cleansing to us in its application. Participating in it somehow cleanses us as well. Again, he’s not so much commanding us to do something as much as he is inviting us to be something—the kind of people who have been so deeply and intrinsically affected by the gospel within us that it begins to express itself in some pure and vivid and clear ways through us.

At this point, we can paraphrase James 1:27 to read: One of the purest and most undefiled demonstrations of the gospel is…

Many translations use the words “look after” here, which is important to address because sometimes when we “look after” something or someone we’re able to still maintain a sense of distance between us—like when I was a kid and my mom would ask me to “look after” my little brother and sister. I would maintain an awareness of their presence but certainly didn’t want to get involved with what they were doing! So “look after” isn’t the best connotation here.

The essence of the language here, however, is best translated “to give intense attention to and to go see”. The tense of this word calls for this to be our habitual practice and attitude and not just an isolated act of do-goodism or charity. It’s less about what we do periodically and more about who we are consistently. It conveys far more than just stopping by and saying hello, but instead implies a sense of consistent closeness and nearness, and personal contact.

Some translations use the word “visit”, which is strong. In scripture, it is often used in reference to visiting the sick. Luke 1:68 uses the same word to describe the redemptive work of Jesus on our behalf when it says, “Blessed be the Lord God…for He has visited (cared for) us and accomplished great redemption for His people…” He came near, wrapped Himself up in our brokenness and was broken by our brokenness so we don’t have to be broken anymore. In the gospel, God says, “I see you where you are and I’m coming after you!” Perhaps James is suggesting that this gospel is most acutely and purely put on display when we echo that same sentiment with our lives to those around us.

At this point, we can add to the paraphrase of James 1:27 to now read: One of the purest and most undefiled demonstrations of the gospel is to move towards…

Remember, this is a descriptive verse. James is describing something for us, and in so doing is not being prescriptive, but descriptive. Orphans and widows—the fatherless and the husbandless—easily represented two of the most marginalized and pushed-aside classes of people in James’ culture. They carried no legacy and contributed nothing to society, so society pushed them away. James is using them as representatives of the most marginalized, disenfranchised and vulnerable groups of people we can come in contact with.

I don’t believe he’s being prescriptive—as if it’s orphans and widows only. I believe he’s being descriptive, so if we were to say, “But James, what about victims of trafficking, the homeless, the under-resourced in our city, the parents in crisis and on the brink of losing their children or my struggling neighbor across the street?”, he would not say, “NO! It’s orphans and widows ONLY!” Instead, I believe he would say, “YES! That’s where we go! Those are our people!”

In essence, he’s suggesting that we become the kind of people who move towards, give intense attention to and visit those in our world who have been outcast, marginalized and pushed aside the most. And when we do—when we step towards the hard and broken, and not away—it puts the heart of God demonstrated in the gospel on display with a vividness and clarity and purity and cleanliness unlike anything else. 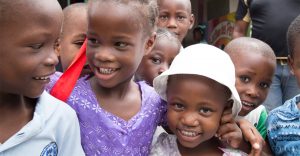 Your friends or family or co-workers might look at you and wonder why you’re so boldly going against the status quo of avoiding and isolating yourself from hard and broken things and instead choosing to say, “I see you where you are and I’m coming after you!” They’ll wonder why, and you’ll have a great answer to that question—ultimately because of what Jesus has done for me.

Now we can add even further to the paraphrase of James 1:27 so it reads: One of the purest and most undefiled demonstrations of the gospel is to move towards hard places and broken people, not away from them.

We tend to neglect this portion of the passage in our foster care, adoption, and caring for families discussion. Probably because we’re not entirely sure what the connection is and how it ties in. But I think it’s clear now…

Our participation in this work—and even more than that, our becoming this kind of people in the gospel—is “cleansing”. It puts a clean, unadulterated picture of the gospel on display, but it cleanses us as well. Who has time or energy to be stained by and consumed with the affairs of this world when we’re so immersed in and stained by the brokenness of others?

It changes our perspectives, our worldviews, our hopes and dreams and prayers and families. It changes everything—for the better. And we’re somehow “cleaner” for it.

I know stuff like this gets a little academic and cerebral. But sometimes that’s necessary to truly deconstruct it a bit in order to renovate our understanding and application of some things that are truly important. I hope, in the end, as we’ve rebuilt this profound passage of scripture we’re all acutely familiar with that you’ve seen it in a new, more beautiful and vivid light.

Of course foster care, adoption, and caring for families is a direct and beautiful application of this passage—but we now also see the opportunity for there to be an endless array of expressions and demonstrations of this beyond just that!

I’m grateful to be stumbling along with you as we together figure out how not just to “do” James 1:27, but to “be” it—in the lives of kids and families we are loving and serving, and beyond.

This blog was originally posted on Jason’s website. Check out his original post and watch Jason explain James 1:27 in his own words! 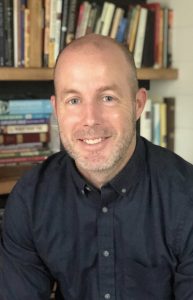 Jason is a writer and speaker who encourages families and equips churches in their foster care and adoption journeys.

Jason currently serves as the Director of Church Ministry Initiatives with Christian Alliance for Orphans. In his work he speaks and teaches at churches, conferences, forums and workshops on church-based ministry strategies and best practices as well as encouraging families that are in the trenches and those that are considering getting involved.

Jason and his wife, Emily live in Texas with their daughters. He has authored 3 books: Reframing Foster Care, Everyone Can do Something, and ALL IN Orphan Care and he blogs regularly at www.jasonjohnsonblog.com.

So Much to Celebrate in Ethiopia!