Adoption & foster care advocate Jason Johnson once said, “There’s never a perfect time to foster or adopt. Just a lot of reasons to say YES despite the many reasons to say NO.”

It’s easier said than done. But saying the difficult YES to adoption can have a profound ripple and begin unfolding amazing details orchestrated by God.

We had been praying about adoption for years.

We researched agencies, asked the Lord to guide us toward an adoption route, and really entered the process open-handed. In July 2019, we fully submitted an application with New Life Adoptions for the domestic adoption of a child up to 18 months old. We really felt like God was asking us to just say “YES” and to leave the details up to Him.

So that’s what we did. We began adoption with very little in our bank account, not sure how the Lord would provide but certain He would. We knew He had called us to adopt now, and we just needed to trust Him. Over the next 8 months, we watched people give generously, work alongside us for service projects, and carry our family in prayer. 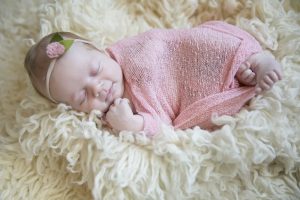 We are now 4 months in and could not be more thankful for our precious daughter. She is joyful, content, beautiful, and an absolute answer to prayer.

We chose to adopt while our other children were young because we wanted the child to know they were part of the plan.

Our daughter is not Plan B, an after-thought, or us trying to do something “good.” She was wanted, chosen, prayed for, and fought for.

We knew from the moment we said “YES” to adoption that God had our child for us. We did not enter the adoption journey for any child, but for our child.

The timing is actually insane. Our daughter was conceived within weeks of us applying to our adoption agency. We were specifically praying for our child, knowing the Lord was creating him/her. We just had no idea He was doing it along our same timeline!

The following 2.5 weeks after saying “yes” were spent in the NICU as our daughter’s little body fought to heal. But the Lord worked miracle after miracle in our daughter’s little body during her time in the NICU. We were told multiple times that she would leave while still on medications, and on the day of discharge, she was released with zero medications and a clean bill of health! When we started the adoption process, we had just given $5000 away from our savings because we felt like the Lord asked us to. That left us with $4000 in the bank. It did not make any sense to embark on such an expensive journey, but the Lord provided. We were able to fully fund our adoption in a little over 4 months—something we never thought would happen!

We are so grateful for the financial provision of Lifesong and the matching grant you provided. It led to a tremendous burden being lifted, and us being able to bring our daughter home, paid in full.

Our only job was to love her, and not to finish fundraising. That is a blessing we will never take for granted!

We had a few friends who only wanted to give towards a matching grant. Once that opportunity arose through Lifesong, we were able to make a huge dent in our fundraising. Without Lifesong, I honestly do not think those donors would have given.

If you’re adopting or considering adoption, we’d love to walk beside you! We offer matching grants, interest-free loans, fundraising tools, and a FREE online crowdfunding platform to help you overcome the financial hurdles of adoption.