Just three years after grieving the loss of their daughter, Jon and Kristen felt called to adopt. The following post written by Jon details their journey from calling to homecoming.

In January 2013, we mourned the loss of our daughter Kate.

She was stillborn at seven months.

We think about the many moments when we felt Kate’s hands and feet push out against Kristen’s baby belly and the eagerness and anticipation we experienced waiting to bring her into our world. While it was God’s plan to take Kate home, we are so grateful that we had the opportunity to meet, hold, and touch our precious daughter. We are forever grateful for how God transformed our lives through Kate’s.

In January of 2014, we celebrated the arrival of our son, Cullen Isaiah. While we found strength in many verses of scripture after losing Kate, one in particular took hold in our healing:

“…and provide for those who grieve in Zion – to bestow on them a crown of beauty instead of ashes, the oil of joy instead of mourning, and a garment of praise instead of a spirit of despair. They will be called oaks of righteousness, a planting of the LORD for the display of his splendor.” (Isaiah 61:3)

But eleven weeks later, Kristen miscarried. We were overcome with sadness.

Little did we know what God had in store for us.

A few months later, on the morning of Father’s Day 2016, Kristen said to me, “Maybe we’re supposed to adopt?”

God’s timing amazed us. Our sermon at church that very morning was on the book of James and more specifically, adoption and caring for the fatherless.

The message included the encouragement from James 1:27:

“Religion that God our Father accepts as pure and faultless is this: to look after orphans and widows in their distress…”

That was the moment we knew we were called to pursue adoption. We both are willing to admit that while we supported others in the adoption process, it had never really crossed our mind to adopt or get involved in foster care. It wasn’t until God opened our eyes that day that we knew it was something we must do.

After going through the process, re-reading His words, and diving into the adoption and foster community, we realized how badly we had missed the mark on recognizing the importance of adoption. Sadly, we think the Body of Christ has left behind so many kids that could so easily be served and loved. But we pray for His Kingdom to come. And in that, we pray the body would move towards the needs of orphans. 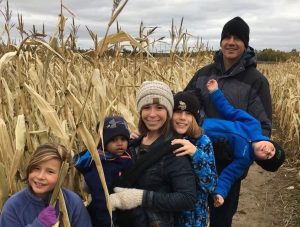 The single biggest anxiety we had about adoption was the finances.

We knew it was going to be expensive and require way more money than we could ever think of coming up with on our own.

Time and time again during our adoption, there were days we needed literally thousands of dollars, and we didn’t know where it would come from. We did fundraising through garage sales, silent auctions, and a GoFundMe account. Each one of those provided just the right amount when we needed it.

There were two moments in particular when I approached a local bank for money. I thought–

In two different instances, the banker expected me to come in and sign the papers on that particular day. The first instance was when Lifesong came through with an approval for an interest-free loan—literally just a couple days before that payment was due to our adoption agency. The timing blew us away. Our first thought was–

Although we were thankful, we didn’t fully give God the glory.

Then about two weeks later, we needed about $5,000. Just a few days before it was due, the night before I was going to the bank, we received an email that we had been awarded another grant for the exact amount we needed!

It was at that point when I surrendered to God and said, “Ok! I will not go to the bank!”

He covered every expense the entire time, even when we didn’t know how He was going to do it, He always came through. Doesn’t He always?!

We are so thankful for organizations like Lifesong that care deeply about God’s children. We can’t wait to hear more stories of children who have families because of the work that you do. You are truly changing lives for generations of people. We cannot thank you enough for the role you play in God’s work of caring for his children.

We can help. We provide adoption financial support to families like Jon and Kristen’s to help them overcome the financial barriers of adoption.