I remember the first time I saw my girls. I had butterflies in my stomach.

At first it was a picture on my Iphone. Then I remember walking into the agency and I saw them through the window blinds. The youngest had long (and I mean long!) black pigtails and sat next her birth mom quietly. The oldest was energetic and busy. We met our first two foster daughters that day in March 2012.
Before we met them, we talked with their birth mother. She was concerned because she knew we didn’t have kids and thought maybe we just wanted to steal hers. She was also concerned we were the sixth home the girls were going to in less than a year. Both April and I made it clear why we were foster parents. We were there to support both her and the children. April graciously let her know that we would probably fall in love with her girls, but also let her know their time with us was intended to be temporary. She told her we will probably have a hard time letting go, but our goal was to see her family put back together.

I let her know that we would take care of her girls until they either went back with her or until we died. This family needed to see commitment, and I meant it.

They moved in with us on April 5th. Two months later the nationally recognized Father’s Day came and went. People congratulated me and I sincerely appreciated it, but it felt … well … contrived.

The differences between being a biological dad and a foster dad are many. A biological father generally knows what has happened to his child since day one, but a foster dad doesn’t. Also, a biological dad has the freedom to choose, for the most part, the influences on his children, but a foster dad doesn’t. A biological father can make emotional, mental, and social strides with his children. A foster dad may take three steps forward only to take four steps back, maybe even five. Often things get worse before they get better. Sometimes this happens as the cultural expectation of the child’s age conflicts with the realities of the child’s development, the bio-familial influences, or the sheer stress of familial dysfunction and separation.
A biological father is naturally trusted by his children.  A foster dad has no such benefit.
I painfully remember my oldest shunning and sometimes violently resisting my attempts to love her like a father should. For several months I tried to simply put my arm around her shoulder. She would look at me awkwardly and remove my hand. I understood, of course, why it all happened that way. If I were in her shoes, I’d probably do the same thing. It was still difficult. Trying to love someone who didn’t want to be loved by me was probably one of the hardest things I’ve ever had to endure.

Why it’s worth it

Breaking through the brick wall of a five-year-old girl’s heart takes time and patience, mercy and grace, one brick at a time.

I knew that getting her to trust me would be my greatest battle, and a battle it has been, but this battle was not with her. It was and is within my own heart.

Seven months after bringing the girls into our home, on November 6, 2012, my oldest foster daughter, on her own initiative, actually sat on my lap while I was on the recliner. For the very first time … she sat on my lap and fell asleep.
To me, that was my first father’s day.
Grace.
*This post first appeared here on Lifesong’s blog on June 18, 2015. By God’s grace, Bill and his family are thriving.

Honor him by building futures in Haiti. Just $30 adds a building block to the residential or school building needed to provide education for students in Haiti seeking to break free from poverty and find their identity in Christ. And this month, every gift is matched up to $130,000. Your dad’s impact will go twice as far!

Give a building block in Dad’s honor 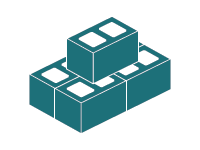